LNER Goods set
This goods set has been formed up over the past few years, and currently consists of a fruit van, three five plank open wagons, and an internal use 5 plank wagon used for loco sand storage. The five vehicles are currently on loan to the Rousebarn Steam Railway, and a sixth wagon, a 7 plank coal wagon is currently under restoration.
Status: Operational (On loan to the RSR) 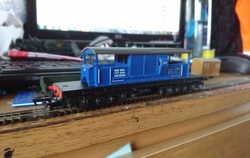 Network Southeast Ex Southern Railway 'Queen Mary' brakevan ADS56304
This brakevan has been purchased by the Heritage Goods Group, and donated to the railway. It was finished in it's end of mainline career livery of Network Southeast, and is rather popular with the Diesel enthusiasts, who have recently requested it's use with our NSE coaching set.