BR Peppercorn A1 Pacific No.60163 Tornado 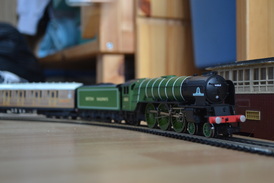 60163 Tornado on a service train
Newly built Peppercorn A1 pacific 60163 Tornado arrived on Thursday 25th August 2011 after working 5Z11 Hither Green - Wheldrake. As part of a long term contract with the A1ST, we have been made secondary custodians of the new build LNER pacific. when not on the mainline, 60163 will be used to haul our LNER rolling stock and the Pullman Cars.

Based at 51A Darlington
Boiler Expiry Date, August 2018 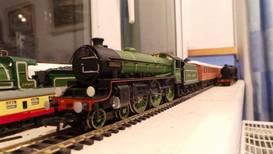 61306 masquerading as classmate 61002 Impala
Recently returned to the mainline, Dave Buck's  B1 61306 Mayflower makes a fine addition to the DVR's fleet. It has been agreed that the B1 4-6-0 will be based with us when being rested from railtours in and out of York.

Formerly Based at 25F Low Moor
Status: In Service - based at Southall Railway Center for mainline duties. 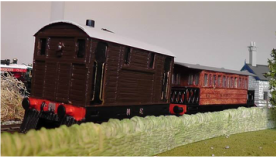 8216 on the RSR during 2015
One of the Pre-grouping LNER engine societies latest acquirements. This engine was donated to the group in the late summer of 2009, and was kept sheeted over in a makeshift shed. The boiler was refurbished last year, and was completed in early feburary this year. The panels had been refurbished and replaced, and  the sideplates and cowcatchers repaired. the engine has been finished in post 1944 NE livery. The aim of the group's next phase for this engine, is to finish up the restoration of our second W&U tramcar to run behind 8216. 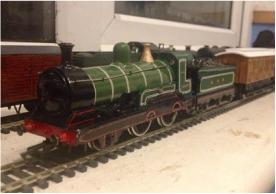 1069 at the helm of the GNR/ ECJS coaches
This quaint little engine arrived on the railway in early December 2014, and is one of the GNR E1 2-4-0 tender engines, numbered 1069. Her previous owner had her restored to full GNR apple green back in 2009, but has since not been able to carry on with looking after her, so placed the engine up for sale. A member of the group who built No.268 subsequently purchased the engine, and donated it to the railway. 1069 is now apart of the Pre-grouping LNER engine society, who also look after 268, No.12, and 2606. 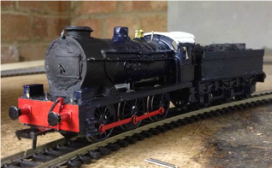 268 with ECJS coaches and LNER Suburban
The Great Eastern Railway J42 company has decided to home their newbuild/ conversion at our railway. The engine, utilises the remains of an LNER 0-6-0st tank engine, and has take on the classification of a J42, a class that never existed, but fits the gap between the J41's and J45's, and is numbered 268. She has been named Bessie, and also achieved the nickname of Baby Bertha because of her slight resemblance to the MR's Big Bertha. The only discrepency is that it shares it's number with a scrapped member of the J69 tanks, also of GER origin.
Status: Operational
Boiler Expiry Date: May 2024

Owned by the Gresley Six Coupled Locomotive Society, J39 1974 arrived in early March, and was put into service almost instantly. The locomotive, was a Predominant ECML worker, being based at 35A New England shed, and then toward the end of it's BR career, at 33B Tilbury. It was withdrawn on 31/03/1960 at Stratford, however, the now owning group purchased the engine.

8825 with the suburban stock
Purchased in operational condition, the locomotive arrived on the line in early December, and is now in operational service.

Purchased in operational condition, 8544 was a Stalwart performer prior to withdrawl in 2007. Withdrawn following an incident with a faulty set of points, damaging the locos firebox due to internal components "smacking" into it, it has been subject to a fairly long term overhaul, which will soon be coming to an end.
The overhaul was taken on by the same team that returned the West Sussex Railways own B12/3 61572 to operational condition. In November 2011, the loco was moved to Ravensmead, WSR, with many components already having been overhauled by our own staff in 2010. It was seemed to be a simple overhaul, repairing the damaged firebox and wheels, and outshopping it in time for the return of our Gresley J50, which too was moved there. The staff there, were overwhelmed by the extent of the damage, and only managed to get the wheels completed.
In late September 2012, the loco was moved from Ravensmead, to the SGLW LTD, where the firebox work was completed. 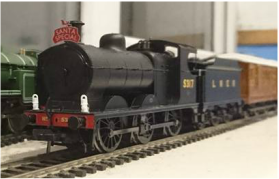 The lengthy overhaul of the lines beloved Pom Pom has finally come to a close. The engine has been finished in LNER black, and it is intended to run the engine over the weeks toward the end of 2014 using the fully formed Post war teak set.
Status: Operational
Boiler Expiry Date: January 2025 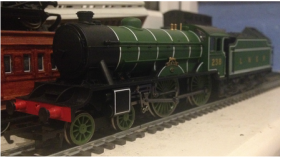 The lengthy overhaul of the lines beloved Shire has finally come to an end. The engine has been finished in LNER Apple Green, and it is intended to run the engine over the coming weeks toward the end of 2014 using the newly formed twinart teak set.
Status: Operational
Boiler Expiry Date: January 2025 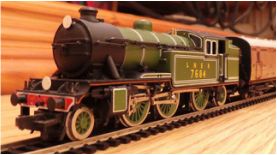 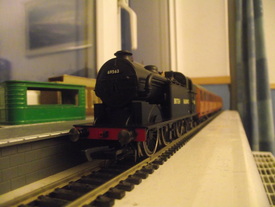 ﻿LNER Gresley N2 69532 was Purchased from Stratford Works site prior to the knocking down of it in readyness for the Olympic stadium to be built there. Along with John, now on static display outside Stratford Station, the N2 was found with two Ex LNER Gresley Teak coaches, No.s E1435 and E24387. The two coaches and N2 were purchased by us, with the 69563 going to Barrow Hill for overhaul, and the coaches to Doncaster's Wabtec depot. It turned out that 69563 and the two coaches were used during the 1948 London Olympics, and with them overhauled, they paid visit to John at Stratford being placed in the freight line loop a few meters south from the Olympic Stadium.
Boiler Expiry Date: July 2022, although it is most likely to see less than 8 years in operation.

This locomotive has been a superb addition the railway's fleet since it arrived in the late 80's from it's first home. The engine has been a roving amasador to the railway, visiting the SS&SRR, and WSR over the years for various galas and events. It's condition is now deteriorating saw 69022 be withdrawn in early Autumn 2013. The locomotive was retubed during the autumn and winter of 2013, and was back in service in time for the May Bank Holiday half term.

Originally based at Darlington 51A
Status: Operational

This locomotive is proven to be a superb addition the railway's fleet since the arrival of it's sister 69022 in the late 80's. The engine has been under overhaul at Darlington Works for the past 15 years, and has been finished in LNER lined Black. The engine is booked to make visits to both Tennington Park, the West Sussex Railway, and the WSHSC for various events throughout the remainder of the year. 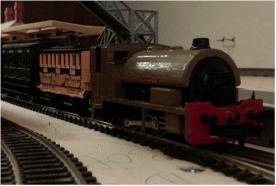 This locomotive was purchased by a consortium of loco department members in the 80's, with the aim to return it to steam for use on the lines vintage trains. The engine was completed in January 2015, and was finished in ROD Kahki sand, and named Welsh Guard. No.12 has been fitted with vacuum piping for the first tim﻿e in it's working life, and is now able to work passenger services.

﻿Purchased from a private Railway at the end of September, 3582 had been butchered to a point where it didn't resemble the engine it should be. The original owner finished it off in a blue colour, as Edward from the Thomas and Friends stories for use at events, however, because of the major modifications made to the engine, it was a poor steamer, so was withdrawn and stored. Our workshop is now working hard to restore the engine to it's former glory, and intend on finishing 3582 in it's LNER Guise of plain black with L. & N. E. R. lettering on the tender. Many of the parts have been either replaced, or refabricated - the cab, roof and extended splashers being the most notable parts.

﻿A Midland boiler was purchased from a private site in earnest 2014, along with a GNResque tender. The Pregrouping LNER Engine Society purchased the boiler and tender from the railway, with the intention of creating a what could have been Ex Midland & Great Northern Joint Railway 0-6-0 tender engine. With this in mind, a set of driving wheels were acquired from a scrapyard, and the project commenced. The Engine is being finished in LNER Plain Black as No.22.

Status: Operational after painting and running in has been completed
Boiler Expiry date: April 2025﻿

Engines under overhaul/ on Static Display 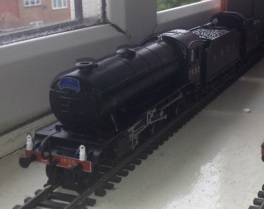 This engine has arrived on the railway from the K3 mogul trust. It will eventually be moved into our museum to go on display with the other engines and stock in there.

Status: On display in museum 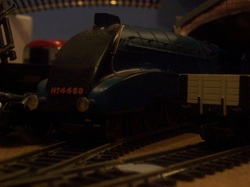 Mallard was the first tender engine to be bought by the railway and in 2006 she was sent to the NRM to have its boiler restored. She is now back in action after her tender received a full overhaul this year due to a burst tank in her tender that caused it to shake and tilt during runs. 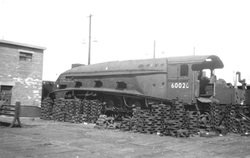 Photo (c) Kingfisher 24
A recent Purchase by the A4LPS, the loco was in poor condition when it arrived, and was immediately stripped down to allow it's running chassis and tender frames to be sent away to be overhauled. 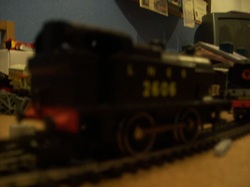 This Ex GER Y4 class Locomotive was the first engine on the railway. When it arrived it came with two wagons and a LNER brake van aswell as the LNER J84 No. 8474 with two LNER 0-4-0 coaches. They were given the nickname 'The North Eastern Steamers'

Status: On public Display after withdrawal from service on 05/01/2012 *Now under Overhaul*

Boiler Expiry date: January 2012 - on display at the WSR
nathanNSEIvor08600gibson