5328 has been purchased from a group based in Cornwall. The engine's first outing on a passenger service will be the Red Dragon Pullman.

Originally based at: 84G Shrewsbury
Status: Out of service requiring firebox work

7822 Foxcote Manor is usually found on the Llangollen Railway in Wales, and has been placed on a long term hire to us.

5051 Earl Bathurst has joined the fleet for our museum on loan from the Didcot Railway Center. 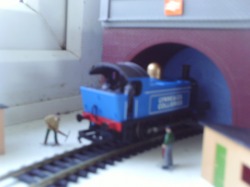 This loco was the third of the railways locos. It was bought in late 2002 with the LNER ventilated van which now resides wheel-less next to the branch station tunnel . The loco is also situated at this station and is only used for removing broken branches from the line during Autumn. the railway currently has no use for her so she is stored off site.