D5908, one of the class 23 'Baby Deltics' arrived on the railway from a site in south London at the end of November. The engine was in poor shape, and an immediate examination was undertaken upon its arrival. D5908 is now available for service and has been finished in Two Tone BR Green with double arrows. 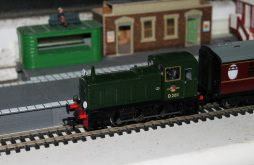 D2011 was built at Swindon Works in 1958. Withdrawn in October 1972, it was sent for scrap. However, the Doncaster Valley Railway Diesel Society (DVRDS) were looking for a BR Shunter, other than the ubiquitous 08 shunters. Whilst searching for one, they came across D2011. After negotiations, the shunter was moved down to Bromley Locomotive works, where it was overhauled. It has taken 40 years, but now, with 2013 in our sights, D2011 will see it's first spell in service !


Status: Overhaul completed and awaiting transfer up to Wheldrake 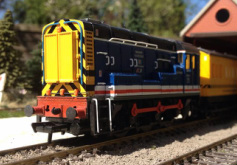 Eagle was purchased a few months ago, the loco arrived just after the May bank holiday weekend 2016.

The engine was created using the usable remains of an 08 used for spares for 08600 and 08641, the Southern locomotives trust purchased the remains from us and proceeded to build No.3 with them using plans sought from a descendant of Richard Maunsell. The engine was completed off site on Feburary 22nd 2014, and arrived on the 26th. The only job that needs doing to the engine is the lettering and numbering, which will be sign written.

73108 Burdock seen minus Nameplates
73108 was purchased from BR on withdrawal and was supplied with a spare set of traction motors from an already disposed member of the class. The engine has subsequently been named Burdock having failured on multiple occasions in it's early days on the line due to the air intakes taking in dandelion seeds from nearby fields during the summer season of 2000.
Status: Operational

33063 and D5908
33063 R J Mitchell is on long term loan from the South East Loco Group, commonly based at The Spa Valley Railway. The loco is to be a star attraction on the line over the coming years.

Diesels formerly based on the line 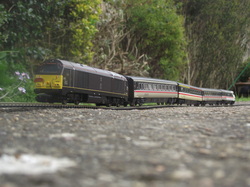 The Queens Messenger was donated to the DVR after the Queen opened the line in the mid 1990's. It sees most of its days in the yards at Doncaster station with BR 06 shunter 'Barcaly' No.06003.
Originally based at Toton TMD
Status: No longer a member of the fleet due to mainline duties, thus it has now left the railway permanently. 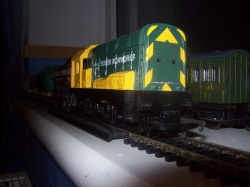 This locomotive was bought in early 2003 and came with a face. during late 2009/ early 2010, the face was removed from the locomotive. This locomotive has been sold off as there is now no need for it after the re-acquaintance of Anglia Railways 08 No.08810. 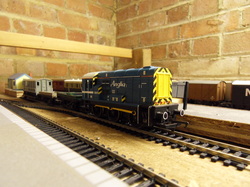 Bought in late 2002, this diesel failed in it's first few months of service on the line and was withdrawn from service a week after. Stored off site for many years, it was sent to Teddington TMD where Matthew Prices team set to work restoring her. Soon to be returned, she will start services again in October after the Branch Line weekend and Thomas specials, as well as the autumn tints specials during September.
Originally based at Crewe


Status: out of service due to major faults in its engine which are deemed unrepairable. 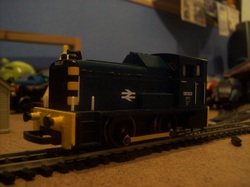 This sturdy looking diesel was purchased in late 2005 with a cattle truck and GWR 'Toad' brakevan. She has not seen much life outside of the sheds, and is due for a cab refit so is currently out of action. 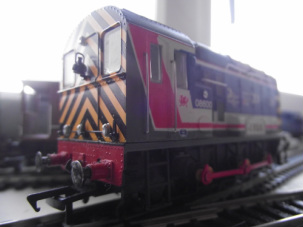 IVOR was bought by the DVR from the EGSR during the summer months and is so far the lines only 08 shunter in this livery and to act as a station pilot. Occasionally, she can be seen hauling the SR two coach stock when rostered.
Originally based at: Hither Green

Status: Operational, with only a few months left in service due to its constant use over the past 9 years.